Notice: fwrite(): Send of 317 bytes failed with errno=10054 An existing connection was forcibly closed by the remote host in C:\WebSitesWV\wordpress\wp_whiskymoods\wp-includes\Requests\Transport\fsockopen.php on line 217
 The Catch
Most popular now
You are at:Home»Uncategorized»The Catch
By Josh Hammond on February 5, 2012 Uncategorized

Baseball, America’s national pastime, was at a crossroads in 1954. It was the year of Brown v.Board of Education, the Supreme Court decision that desegregated America’s public schools. Meanwhile, the New York Yankees had won six consecutive American League pennants without carrying a single a black player on their major league roster.

The rival Cleveland Indians, who under owner Bill Veeck broke the American League color line and won the World Series in 1948 with former Negro League stars Larry Doby and the legendary Leroy “Satchel” Paige, surprised Casey Stengel’s Bronx Bombers, winning the 1954 American League pennant with 111 victories and 43 defeats, a record number of wins in a 154 game season and record that stands today. The all-white Yankees finished in second place, 8 games off the pace with 103 wins.

The heavily favored Tribe faced the New York Giants of the National League in the 1954 Fall Classic. It was the first time the Giants, who played in the cavernous Polo Grounds in uptown Manhattan, had made it to the show since 1934. Posting just 92 victories, their winning percentage was 19 games less than the Indians, and against the Tribe’s “Big Four” rotation of Bob Lemon, Early Wynn, Mike Garcia and Bob Feller, some sportswriters conjectured that the stats of Giants hurlers Johnny Antonelli, Merv Grissom, Johnny Sain and Don Liddle looked a little suspect.

While the Indians were powered by black stars like Larry Doby, Al Smith, Dave Pope and Luke Easter, the Giant’s had fleet outfielder Monte Irvin and an explosive young center fielder who emerged from the Negro Leagues named Willie Mays. His 42 home run season upstaged Yankee golden boy Mickey Mantle. If you think owners were paying these guys $100,000 for a season’s work, they weren’t.

Ironically, when general manager Hank Greenberg was running the Indians’ farm system he was asked by ownership to evaluate Negro League stars Mays, Hank Aaron and Ernie Banks and Greenberg recommended the Tribe pass on all of them.  All would become Hall of Famers.

With the first game of the World Series tied 2-2 in the eighth inning, Cleveland first baseman Vic Wertz slammed a long drive into the cavernous center field alley at the Polo Grounds. The shot would have been a home run in any other park in the majors, including Cleveland, which had a 410 foot fence in straight away center. As one can see from the video, Mays turned and ran, catching the ball over his head at around 450 feet in the narrow alley, which was not designed for baseball. Wertz was a fly out and Mays spun and threw the ball to second base, keeping runners from tagging up.

The game went into extra innings and the Giants won on a clutch home run by pinch hitter Dusty Rhodes. Demoralized, the Indians and their 111 win season collapsed like a house of cards and were swept by the Giants in four straight games. Had Mays failed to make the catch, the circumstances might have been different.

Three years later Mays and the Giants abandoned Manhattan and the Polo Grounds and moved to San Francisco. Cleveland would not play in another World Series until 1995.

Cleveland third baseman Al Rosen, who took a pay cut from $42,000 to $37,000 after the Tribe debacle, would retire from baseball in 1956 due to injuries. He would later become a baseball executive, serving as president (and chief operating officer) of the Yankees (1978–79), and later with the Houston Astros (1980–85). Ironically, he became president and general manager of the San Francisco Giants (1985–92), taking them from last place in 1985 to the NL West title in 1987 and the NL Pennant in 1989. He took four years out to serve as a naval officer during World War II, and drove a landing craft in the battle of Okinawa.

Bob Lemon, who won two World Series games for the Tribe in 1948 and lost two games the 1954 meltdown, became a successful major league manager with the Kansas City Royals, the Chicago White Sox, and he won a World Series for George Steinbrenner’s New York Yankees. Like Rosen, Lemon took four years out to perform military service during World War II.

Giants skipper Leo Durocher, who, while Brooklyn Dodgers manager, supported the hiring of Jackie Robinson to break the National League color line, remained an outspoken, controversial figure in major league baseball and was elected to the Baseball Hall of Fame in 1994.

Power hitting Cleveland center fielder Larry Doby, who broke the American League color line in 1948 and was a leader on the 1954 team, would be elected to the Baseball Hall of Fame in 1998. After retiring from baseball he finally discuss the segregated hotels that many black pro baseball players stayed in well into the 1960s, a theme not discussed in the press.

Willie Mays went west with the Giants but never won another World Series. He was elected to the Baseball Hall of Fame during his first year of eligibility. Some sportswriters say he was the greatest baseball player of all time. Like his friend Yankee slugger Mickey Mantle, he ran into a few problems with baseball bureaucrats due to his post-career association with casino gambling interests.

As for Vic Wertz, whose long drive got the party started, he contracted polio in 1955 but was able to bounce back and made the American League All Star team in 1957. He never talked much to the press and retired to operate a beer distributorship in Michigan.

Baseball changed forever when Mays made The Catch. 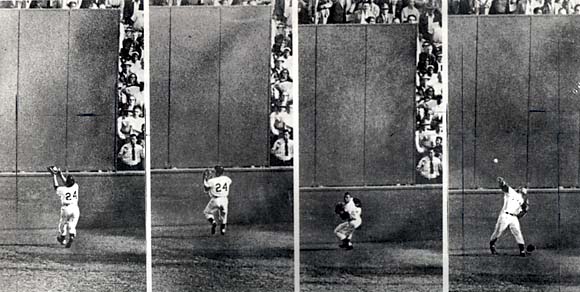