Most popular now
You are at:Home»Arts»Classics Update»The Card Players. What’s Going On Here?
By Josh Hammond on July 6, 2014 Classics Update

Or what’s not going on here?

This is the best known of post-impressionist Paul Cézanne’s iconic The Card Players—there were five in the series—along with our parody. (Can you spot the changes?). It also happens to be the one that the Royal Family of Qatar paid at least $250 million in 2011, making it the most expensive painting in the history of art.

What the Royal Family of Qatar was really buying was instant credibility and standing in the art world as it sought to establish the Royal Family on the world stage. You see, the other variations of The Card Players hang in the Metropolitan Museum of Art, the Musée d’Orsay, the Courtauld in London, and the Barnes Foundation in Philadelphia. Not bad company. (A great background story on Qatar and the art world at Vanity Fair.)

This is not a Picasso, Pollock, Klimt, or de Kooning that has changed hands in the $125 million plus range. It’s not a valued Vermeer portrait, rather an angular, moody, colorful representation of two Aix-en-Provence peasant gardeners in a card game, Alexandre Paulet on the left, and his son Paulin on the right.

It is unlike any card game I have ever played or seen. It has none of the dramatics of a Las Vegas poker game nor any of the dynamics of a go-fish card game with a kid. It has none of the gambling and drunkenness of the 17th Century Dutch and French paintings in rowdy taverns. Cézanne may have been influenced by a quieter, more contemplative painting of the genre by one of the Le Nain brothers (there were three of them and their styles indistinguishable) that hung in a Provence museum near Cézanne’s home.

One of the beauties of art is that everyone can indulge in their own interpretation of a work of art. What TD thinks is going on here is the unspoken good and bad of gambling. The guy on the left, cloaked in “black,” is the only one having fun. He’s smoking, and in our parody, we gave him something to drink, after all Cézanne did have an uncorked bottle of wine on the table. Uncorked?! We see more of him in the painting and he knows the game. The guy on the right, cloaked in “white,” is too eager to win. We see less of him in the painting and he doesn’t play his cards close to the vest. He is younger and has not learned the lesson in any game of life—to be cautious in dealing with others, especially card cons. He’s too open in his play.

A fascinating aspect of this painting it that there never was a group sitting. Cézanne brought them to his studio individually for studies, as pictured below in the photo gallery. Then he assembled them into a unit of five, four and two players, the latter structure becoming the dominant image as pictured above.

The Courtauld Teachers Guide on Cézanne says, “Perhaps the most remarkable aspect of Cézanne’s card player and peasant works is that their evocation of unchanging traditions was achieved by pushing the boundaries of painting in radical new directions. Cézanne painted freely and inventively, rendering his peasants through a vibrant patchwork of brushstrokes which animates the surface of the paintings.”

Richard Dorment at The Telegraph says that Cezanne must have “asked himself how he could show several figures interacting naturally with one another and yet retain the architectonic structure that permeates his paintings of static landscapes and inert still life.”

Debra N. Mancoff, at an interesting site, howstuffworks.com, summaries the painting best when she points out that The Card Players by Paul Cézanne is not so much a portrait of the two men as it is an exploration of the potential nuance of volume and color.

Card playing is clearly an art genre. There appears to be an ongoing fascination among painters and artists to paint card players as we show in the gallery below. It all started with the 1510 Lucas Van Leyden, a Dutch engraver and painter and kicked into high gear with Italian Baroque artist Caravaggio’s 1594 “The Cardsharps,” with a nice hint of mendacity. The gallery below has a variety of styles and artist including variations on the theme.

What’s going on here? What do you see? 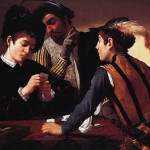 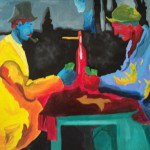 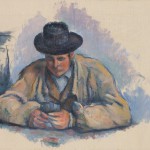 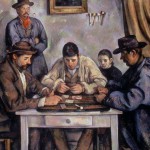 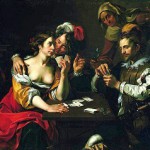 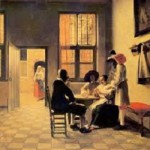 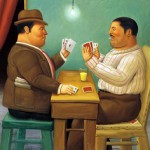 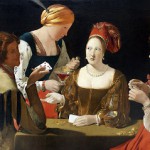 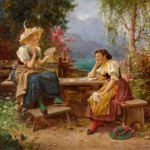 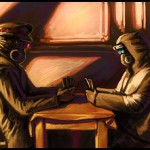 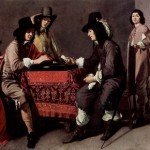 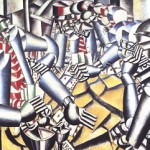 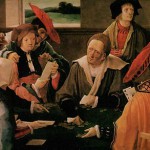 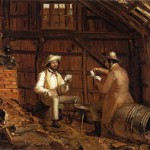 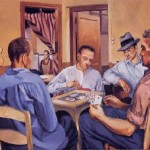 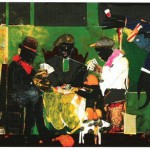 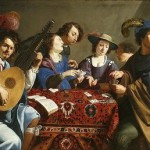 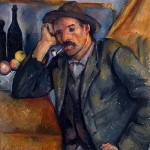 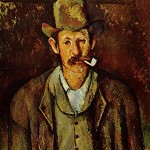 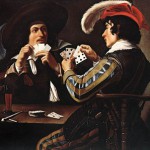 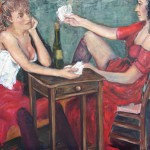 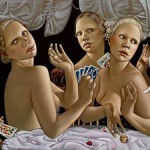 Share. Twitter Facebook Google+ Pinterest LinkedIn Tumblr Email
Previous ArticleAbsinthe Makes The Heart Grow Fonder
Next Article America Wins by Losing at The World Cup: We Haven’t Given Up Our Budweiser, But Now, Hopefully, The USA Is “weiser”.