Just as the great American artist Andrew Wyeth took some liberties with his painting of “Christina’s World” so are we. Wyeth used three models. The model for the torso was his wife Betsy. The model for the rest of the image was Christina Olson. She had a degenerative muscular disorder that was undiagnosed at the time, but most think it was polio. Christina chose not to use a wheel chair, so crawling around the home and open fields at the Olson House in Cushing, Maine, was her way of getting around—to see her world.

For the painting, Wyeth moved the Olson House, now a National Historic Landmark, and outer building structures to suit the balance he needed for the painting. So when you visit the Olson House, open to the public as part of the Farnsworth Art Museum, you will, no doubt, experience some disorientation because the buildings have been “moved.” You may not be able to reconcile the painting with the reality of the location.

“Christina’s world” is one of the most popular American paintings of mid-20th Century in American art. It is part of the permanent collection at MOMA, the Museum of Modern Art in Manhattan—it’s only home.

Not sure what it is that engages us? Is it the loneliness and isolation many of us experience at times? Is it the bleak landscape, the muted palette, typical of this time of the year—the winter months? Or do we identify with Christina reaching out for “another” world? We all see our worlds differently: maybe that’s it, and Wyeth has just done what good art does—got us thinking.

In terms of the mood of the painting, we do know that Wyeth’s father N. C. Wyeth was killed at a railroad crossing in 1945, three year before this painting was done. At ArtHistory they write about the impact of his father’s death on him. “Andrew’s work underwent a significant change after the loss. His palette became muted, his landscapes barren and his figures—if present—seemed plaintive. Christina’s World epitomizes these traits, and conveys the impression that it is an outward expression of Wyeth’s inner grief.”

Wyeth lived in Maine, so for our parody we went back to Maine. We found a fellow Mainer, Charlie Dufour, a great photographer who has a different view of the world than Wyeth or most of us. He calls the image we used in our parody, “Christina’s Dream.”

Dufour says, “’Christina’s World’ appears to be bleak and perhaps even borders on being emotionally painful.  My interpretation is entitled, ‘Christina’s Dream’, suggesting that in her desolate ‘world,’ as she is in Wyeth’s, Christina is actually dreaming of a different existence than the one she is bound to; an existence that is saturated in color and doesn’t have the memories or whatever else that’s tied to the ‘home’ in the distance.  Her dream world has fields full of life and skies as blue as can be. Her dream world is more hopeful  and clear of any baggage from the past.” (See original photograph by Dufour below in the gallery. Click on image to enlarge.) Unlike Wyeth, Dufour used only one model who is known only as “G” in this TD composite.

For our parody, TD has chosen to merge the work of two great Maine artists and create our view of “Christina’s Worlds.”

Editor’s Note: Charlie Dufour will be a featured photographer on these pages beginning 2014. His work will add a new dimension to The Transcendental Dram presentations of the whisky experience in the broader context of art and photography. Take a few minutes to get a preview of what you can expect. You will not be disappointed. Charlie’s work is here: www.du4photo.com. If you are Down East near Belfast, Maine, stop in to see Charlie. Tell him TD sent you. 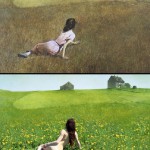