The editors of Transcendental Dram are excited about our selection of Laphroaig Select as TD’s Whisky of the Month. It is just now becoming available in the United States, so our timing is perfect.

Laphroaig is the world’s No. 1 Islay Single Malt Scotch Whisky. This new, innovative expression brings the distinct styles of the Laphroaig portfolio together to create a new expression that stays true to the brand’s heritage with an added layer of complexity and depth brought about by marrying various maturation styles and different oaks. John Campbell, Laphroaig’s Master Distiller, says, “Laphroaig Select delivers a liquid with a unique marriage of our trademark ‘peat reek’ and a gentle sweetness, which we hope will both surprise and delight you.” That is exactly what happened when we first tasted it: transcendental, a great new taste, but distinctively a Laphroaig.

At 80 proof, Laphroaig Select is best enjoyed neat or with a splash of water to release the earthy aroma of blue peat smoke, sweet nuttiness of barley and the heathery perfume of Islay’s streams.

TD: In the US we keep the names of our whiskies simple: Jack, Jim, Evan, even Elijah. I imagine if there were a whisky spelling contest, Laphroaig might be the name that trips everyone up, or does that “honor” got to Bruichladdich? Does the name “Laphroaig” have a special meaning? Or, why was it chosen as the name.

JC: Laphroaig, which has been the name of our whisky for over 199 years, literally means “the beautiful hollow by the broad bay.” It represents the unique tasting notes found within each bottle, which are achieved because of the specific location of the distillery on Islay. This location is unique in that the water running through the soft peat doesn’t pick up any unwanted mineral traces and remains soft and peaty-perfect for making whisky. Additionally, its proximity to the bay allows the sea air to penetrate our dormant casks and finally, unlike peat on the mainland, Islay peat is made up of mosses, seaweed and heather, making for a uniquely different quality of peat altogether.

JC: The one word that would best describe Laphroaig Select would be “complexity.” I have carefully selected Laphroaig from the finest casks representing the classic styles of Laphroaig – Quarter Cask, PX Cask, Triple Wood Cask and Ten-Year Old Cask.  The true heart of the spirit is drawn from the final maturation in new American Oak casks, which are rarely used for Scotch whisky maturation.  The result is an exquisite Laphroaig bottling with our trademark “peat-reek” matched by an additional layer of complexity and depth brought about by the fusion of the maturation styles and different oaks, just like we would have done over 100 years ago.

TD: How did the Select idea come about?

JC: Laphroaig Select is about heritage and is inspired by Ian Hunter, the last family member to own the distillery and the first to use American Bourbon Casks. Ian was a big influence in Scotch, and Select is inspired by his early work using these American casks. Laphroaig select uses Quarter Casks, PX Casks, Triple Wood Casks and Ten-Year Old Casks. This varied cask maturation technique enabled us to create six new flavor combinations and innovate directly from our past.

TD: How did you decide on six flavors and not four or seven?

JC: We decided on the flavors with the Friends of Laphroaig.  The flavors chosen were the best flavor combinations tasted without becoming too complex.

TD: What is Olorosso Sherry and why was it chosen over other sherries?

JC: Oloroso Sherry is the base for many of the sweet Sherries produced for the international market. Oloroso sherry was chosen because it adds the most complexity from the casks.

TD: Part of the aging process is in bourbon casks. I imagine it makes a difference if they are from  Kentucky or Tennessee or another source. Is that the case?

JC: At Laphroaig, we tend to use only ex-Maker’s Mark barrels, which are from Kentucky, for our maturations, giving us a nice consistent wood policy. Removing the potential for variance is what we are trying to do.

TD: Here is a video of John Campbell that tells the story in multiple dimensions.

TD: Vicky, many thanks for being part of this interview about Laphroaig in general and Laphroaig Select, our latest choice for Whisky of the Month. When did you decide to get in the whisky-making business? And how did you get started?

VS: I have had connections within the industry since I was quite young, but actually studied for a finance related career path. In 2007, I had the opportunity to move to the Isle of Islay and a job to develop the Visitor Experience at Laphroaig had come up. Spreadsheets or drinking whisky for a living? There was no question really!  And what better place than at the distillery that produces the number 1 Islay Single Malt Whisky.

TD: What is the best part of your job?

VS: The best part of my job is being part of the Laphroaig family. There is a real sense of community at the distillery among all who work there. People who visit from around the world are welcomed in – arriving as friends and leaving as family. Whisky is a social spirit and it allows conversations and connections to develop which create life-long memories.

TD: What was your first whisky experience? Did your grandmother slip you a nip?

VS: My first whisky experience was when I visited a whisky distillery as part of a school trip – I was only eight years old! I grew up in the heart of Speyside with many big name distilleries around me. They are a big part of the local economy, however, I don’t think schools would allow that anymore. When you grow up with distilleries around you, they simply become a part of who you are. People the world over recognize the names of these distilleries and it is always something that you are proud to have a connection to.

TD: Our website is more about experiences than products. Others cover products and tasting notes so well. We’re interested in the stories, the experiences. Working for Laphroaig must be like a kid in a candy store. What, over the years, has been your best whisky experience?

VS: One of the most memorable whisky experiences I have had is sharing a dram of Laphroaig with Prince Charles. Laphroaig was awarded his Royal Warrant in 1994 and it is something that we are proud to have retained since. Laphroaig is the only Single Malt Scotch Whisky to have this Royal Warrant. In 2008, Prince Charles made a visit to the distillery where he took time to speak to everyone involved on site.  It was a great afternoon where a few drams were shared.

VS: It really depends on the moment. I love to try new taste experiences, whether it’s a new expression on the market or a different type of serve.

TD: What’s next for Laphroaig?

VS: It’s a busy year for Laphroaig! We just launched a brand new global ad campaign, #OpinionsWelcome, which encourages all to share their own opinions of our liquid on our new microsite and via social media. We are also releasing a new Cairdeas expression later this year. In 2015, we will celebrate our 200th Anniversary!

In the 1975 movie Love and Death, Woody Allen’s parody of Tolstoy’s War and Peace, the main character Boris, played by Allen, speaks fondly of his father. He reminisces about his father’s summer and winter estates, and about a small piece of land that his father carried with him where ever he went. It’s one of the many funny scenes in the movie. The land was not much bigger than a divot, so he had his third piece of land well in hand.

Laphroaig has more than one-upped Allen. If you become a Friend of Laphroaig, they give you a life-time lease on a numbered square foot plot of land—ten times the size of Allen’s father’s piece of land—that you can visit in person or online. My plot is 51,782 that I “leased” in May, 1997. If you sign on to be a Friend of Laphroaig, your number will be well into 600,000.

We know of no other whisky distillery with this kind of brand loyalty program with something that you can use as another social network, talk about endlessly, or treat as a pilgrimage to “sacred” ground. We asked Vicky how the program works.

TD: What is the Friends of Laphroaig all about? How many square feet have you leased?

For a great 3-part series on the Isle of Islay, including a discussion about turf cutting go here. With that knowledge and a bottle of Laphroaig Select in your hands, you set for while. Below is a gallery of images from Laphroaig. Click on any image to enlarge it and turn it into a slideshow that you can control. 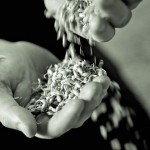 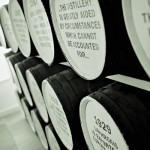 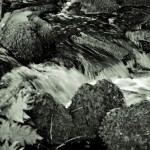 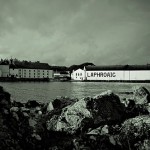 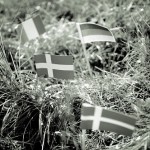 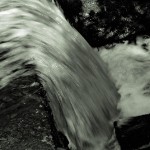 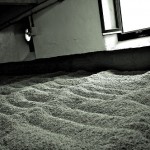 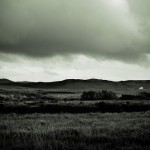 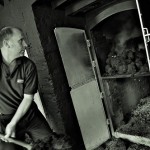 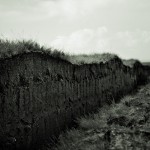 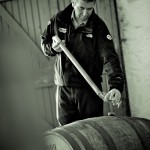 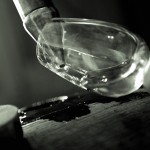 Share. Twitter Facebook Google+ Pinterest LinkedIn Tumblr Email
Previous ArticleAmerica Wins by Losing at The World Cup: We Haven’t Given Up Our Budweiser, But Now, Hopefully, The USA Is “weiser”.
Next Article Balcones Brimstone Corn Whisky: Purification Through A Texas Fire