Notice: fwrite(): Send of 317 bytes failed with errno=10054 An existing connection was forcibly closed by the remote host in C:\WebSitesWV\wordpress\wp_whiskymoods\wp-includes\Requests\Transport\fsockopen.php on line 217
 Fight Like a Girl
Most popular now
You are at:Home»Uncategorized»Fight Like a Girl
By Leslie Nipkow on May 6, 2012 Uncategorized

In a large open space on the second floor of a nondescript building in the Bronx, a couple hundred sweaty fans are gathered around a boxing ring, screaming orders like “Knee!”, “Teep!” and “Hands up!” at a pair of lanky men in shiny shorts while traditional (tinny) Thai music plays over the sound system, setting the tone for battle. We are the church of muay thai.

This is not an arena, and there are no green rooms for fighters to warm up and perform their pre-fight rituals out of sight. Instead, the fighter’s on tonight’s card cluster around the perimeter of the room, posturing, meditating, pacing, or kicking thai pads with the rhythmic thwaps of shin on leather that are so familiar to students of this aggressive combat sport. My teammates take turns lying on the floor for a linament-laced rubdown by our trainer, Coban “The Cruncher” Lookchaomaesaitong, a former world champion and veteran of more than 270 fights. Despite his reputation as the Muhammed Ali of Thailand, Coban is one of the humblest people in the room that night. That humility is one of the greatest lessons he passes on to us, his students.

I started taking muay thai classes in June of 2011, after several years of thinking about it while watching MMA fights. I knew I wanted to study a martial art, and there are so many, but for some reason I was always most intrigued by the straightforward attack of thai boxing, the use of all 8 physical weapons: elbows, knees, fists and feet, and the controlled mayhem that is muay thai. I was scared to try. I knew the conditioning regimen would be fierce and that, if I went to a class, I would not be allowed to cry, whimper, run away or quit. (That was my fear, but also my secret hope.) I bought a groupon for a month of unlimited classes, let it cure on the desk for a while, then, one random Monday, I pulled on some clothes and showed up at a gym.

I stayed at that first gym for six months. Re-learned to jump rope, bear crawl, leap frog and do push ups. I began a casual, often halting, acquaintance with kicks, elbows, uppercuts, hooks and of course, the classic jab-cross combination. When that gym suddenly closed, I found Coban’s, and I was home.

Muay thai is hard. All the time. Every day. Without exception. Coban doles out a killer combination for us to imitate, then smiles and gleefully says “Easy!” This is just gentle, but irresistable sadism. Muay thai is exhausting, but, for me, it is also restful. My busy brain is filled with noise, and, as a freelancer, there is always more networking to be done, always a pitch to be delivered, always another project to shepherd to completion, but when I take my jumprope in hand at the beginning of class, and the interval timer begins to count down five minutes, the nagging voices in my mind grow quiet. (They are apparently not as fit as I am.) Until the day’s last push up, I am focused only on the task at hand, because, if I am distracted for even a second, I will get a foot in my face or a fist in the liver. And when class is over, and I am drenched in sweat and usually ravenous, I am too tired to doubt myself for at least a few hours.

There are days when training, to put it bluntly, sucks. Sometimes it feels like I’ve forgotten everything, or that I’ll never land a proper roundhouse kick. Sometimes everything hurts; usually at least something does. Often, it’s my pride. But I continue to show up. One day a week, I’m motivated by the new oblique muscles I’ve just detected. Another day, one of the other CMTC women texts hoping I’ll be in class to be her partner. Most days I worry I may kill someone if I don’t hit something, and thai pads are a viable and legal option. By Saturday, when I feel like, well, people have been hitting me all week, I just go because it’s what I do.

As the weeks and months of training go by, I am changing. I realize I can do more than I think I can. Then I’m forced to live up to that. I feel part of a community, and the responsibility that brings with it; this feeling strengthens even my outside the gym friendships. I feel tougher, but, at the same time, softer and more open to the rest of the world. Because I am stronger, I feel safe.

They say that everything you are gets exposed in the ring. Maybe that’s why I keep showing up. To look in the mirror, see clearly what’s there, and, if need be, start to fix it, no matter how much sweat, love, pain, anger or Tiger Balm it takes. 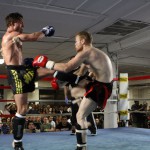 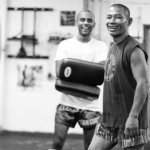 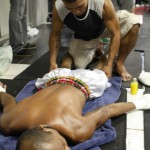 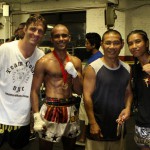 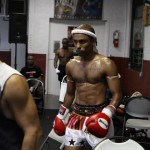 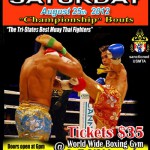