Most popular now
You are at:Home»Uncategorized»The Mannings
By Eric Ehrmann on July 14, 2012 Uncategorized

Of all the quarterbacks who powered the Golden Era that launched the Super Bowl, NFL expansion and Monday Night Football, Archie Manning got knocked to the ground, dusted off the cobwebs and led his team down the gridiron into that zone called ‘better luck next year’ more than any field general in the history of the pro game.

When Roger Staubach came back from military service with the Navy and won Super Bowls for the Cowboys. Manning was drafted as the second overall selection in the 1971 NFL draft by the New Orleans Saints, an expansion team. He could have asked for a trade but he had the right stuff, a good old boy in an old boy market, and he stayed the course. He was the franchise.

His son Peyton, drafted by the floundering Indianapolis Colts, used the leadership traits he learned from his dad to lead the Colts to a Super Bowl and has been voted the NFL most valuable player award four times. Now with the Denver Broncos, he recently led the team to one of the greatest comebacks in the history of the NFL against rival San Diego after trailing 24-0 at the half and was voted player of the week.

Eli Manning, the younger brother of Peyton, was a standout quarterback at Ole Miss like his dad and when draft day came around he did ask for a trade, quietly, sort of. The San Diego Chargers granted his draft rights to the New York Giants and after winning two Super Bowls he’s a shoo-in for the NFL Hall of Fame.

Archie, the founding father of the NFL’s greatest quarterback dynasty, grew up in Drew, Mississippi, and went on to star at Ole Miss in Oxford. A guy that’s all about resolve, he overcame the tragic death of his father by suicide when he was 19 years old.

Like Archie, Super Bowl winner and future Hall of Famer Brett Favre, also Mississippian, drew inspiration from his father Irv, who was his high school coach. The quintessential NFL “gunslinger” Brett is now following his dad’s footsteps, coaching high school ball at Oak Grove his school in near Hattiesburg and has a reputation for chewing out the kids when they don’t make plays, just like he did in the pros.

But what inspiration drove Elisha Archibald Manning III to become the man his old nemesis, Alabama coach Paul “Bear” Bryant, said was the best college quarterback he ever saw play, came from inside.

After a decade with the Saints, it was time to move on. He still wanted to contribute and wound down his pro career as a journeyman backup in Houston and Minnesota. More important was that Archie and his wife Olivia, a former Ole Miss Homecoming Queen, started a family in the home they owned in the historic Garden District of New Orleans.

Archie became the good father, getting involved in New Orleans-area Boy Scout activities. His three sons attended the Isidore Newman School, an independent college prep school that was close to the family home. Cooper, the oldest, played high school football, but a congenital spine injury saw his playing days segued into a career in the oil business. Peyton attended the University of Tennessee. And Eli followed his father’s footsteps at Ole Miss.

The mathematical chances of a star NFL quarterback, or anybody for that matter, producing two sons who have led their teams to three Super Bowls are next to impossible.

Whatever the Manning mojo is, the guys don’t have a problem sharing it.  Archie, Cooper, Peyton and Eli run The Manning Passing Academy each summer for young athletes who want to improve their game.

And to reach out to the young Harry Potter fans, Wikipedia reports that in 2009 Peyton, Eli, and Archie co-authored a children’s book entitled Family Huddle, which tells the story in words and images of how the three Manning brothers played football when they were growing up.

Commitment to excellence. Continuous improvement. Six Sigma for football. Business-to-business buzzwords for sure. But Mannings aren’t Motorola. They’re all about family. And an example of how being the best can become a contagious family tradition. 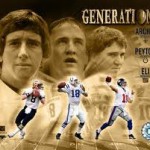 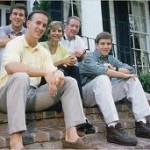 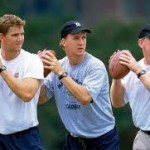 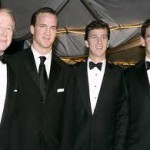 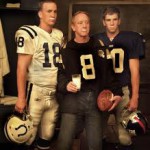 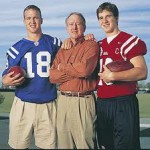