Most popular now
You are at:Home»Uncategorized»Looking Up… Grand Central Terminal
By Leslie Nipkow on December 6, 2013 Uncategorized

I first passed under Grand Central Terminal’s Sky Ceiling in 1985 as a young actress new to Manhattan, on the way from my job as a Broadway theater bartender to visit my first serious boyfriend in Connecticut. Several times a week, I raced to catch the last New Haven-bound train at 11:20 pm. Winded as I hurried through the Vanderbilt Avenue entrance, I would pause at the top of the grand west staircase to rest my heavy bag, overflowing with scripts, leg warmers, sheet music and my soda-spattered bartender’s uniform. After the schizophrenic energy of midtown, the tawny vaulted marble cavern of the Main Concourse is like a suspended breath — a frozen moment of architectural meditation.

From there, it was easy to imagine gliding down the marble staircase into 1930, when ladies dressed for travel and Red Caps ferried their valises on board trains with names like the Wolverine, the Havana Special and the Twentieth Century Limited, which made the daily twenty hour trip between New York and Chicago. Stars like Gloria Swanson, Fred Astaire, Ginger Rogers and Cary Grant, boarded via a long crimson carpet. Greta Garbo skipped the fanfare, entering unseen with the assistance of discreet railroad personnel. Even in the mid-Eighties, with Grand Central in a state of dismal disrepair, passing through its shabby glamour on the way to see my beau turned a mere sleepover date into an “assignation.”

I would join the harried commuters and inebriated day trippers criss-crossing the concourse, many sucking on post-workday smokes, tangled vapor trails wafting skyward in their wake. In the early months of my romance, the Sky Ceiling was completely obscured by sticky black scum, assumed to be cast-off coal dust and diesel smoke, later proven to be the tar and nicotine residue of countless spent cigarettes and the occasional tycoon’s cigar. As I fell in love for the first time, New Yorkers – inspired by Jackie Kennedy Onassis – fell back in love with the newly-landmarked Grand Central, and began a careful restoration, beginning with the symbolic Sky Ceiling. Restorers gently cleaned the mural with soapy water, cotton rags and paintbrushes, in narrow swaths, while standing on a platform hung from a steel trellis, a hundred feet above the unforgiving marble floor.

A small area of ceiling was quickly restored so we could see what was happening above their heads. I was there, aglow with first love, anticipating my boyfriend waiting on the New Haven platform with the single red rose he always brought me. The first time I saw the slip of newly exposed ceiling, I looked for the source of the bright light perfectly focused on the azure and gold rectangle. There was no added illumination; without its nicotine shroud, the blue and gold were so vibrant they appeared lit from within.

Over many months, as the curtain slowly and painstakingly drew back from the Sky Ceiling, my New Haven boyfriend gradually stopped greeting me with roses. Soon he was meeting me in the parking lot, engine running, impatient. Not long after I moved in with him, becoming an official commuter, he stopped meeting my train, leaving me to take a taxi home to what was often a dark, empty apartment. When we broke up, I made a final, numb New Haven-to-Manhattan journey with my belongings in a mismatched assemblage of suitcases and shopping bags. Passing from the dark platform into the weird sunlit night of the Main Concourse my spirits lifted, and, just as Commodore Vanderbilt had intended in 1913, I felt an electric surge of possibility pulling me into the City streets, where anything can happen.

I no longer needed to pass through Grand Central to go home, but still did on occasion. I marked time by the progress of the Sky Ceiling; as its bright beauty was slowly revealed, I aged out of my lovestruck twenties into my ironical thirties and became a New Yorker.

Now that I’ve grown into my wisecracking dame-hood, I never fail to give a nod to the Vanderbilt’s brilliant Caribbean turquoise and 24-karat gold leaf oxymoron. Like me, it has secrets. The sky is backward, flipped from north to south. When early 20th century astronomy buffs pointed out the problem, the railroad tycoon spun like a political pro, claiming the stars were painted from God’s point of view. In reality, the original painters held the drawing upside down, but the critics are missing the point. For direction, travelers have the Arrivals and Departures Board. The Sky Ceiling mural is an artist’s abstraction, out of scale and topsy-turvy; it is an impossibility, a brain-teaser, an inside joke. Think about it: when was the last time you saw stars twinkling in a cloudless blue-green afternoon sky? The fact that few but the most observant notice this gives me the feeling of belonging to a clandestine, password-only club.

In my outspoken forties, I detour through the Main Concourse whenever possible to pay my respects to the quirky mural. In the west corner over Michael Jordan’s Steakhouse, a tobacco-scarred square of ceiling remains to remind us what was; it is as much a part of New York’s history as the patch of cerulean sky still hidden underneath. It is part of my history, too. That’s why, on my wedding day, last November 12th, I asked my new husband if we could pass through the Main Concourse on our way to the Oyster Bar. As always, I paused at the head of the west stairway to take in the splendid waste of space, bathed in the sunny reflection of the impossible Caribbean-blue night with its thousands of misplaced golden orbs. Somehow, despite all the wear and tear, the Sky Ceiling and I are still here, still glowing. Outside the Terminal doors, just as in Commodore Vanderbilt’s time, anything can happen, but one thing remains the same: night or day, this New Yorker always has a place to go when I need to see the stars.

To see a cool video that takes you inside and above the Sky Ceiling go here. 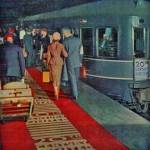 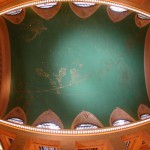 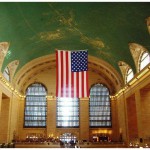 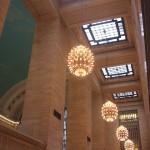 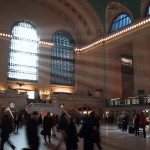 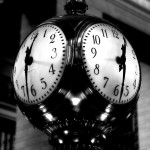 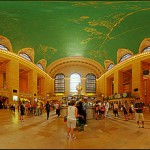 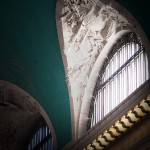 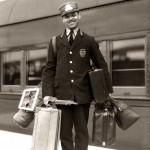 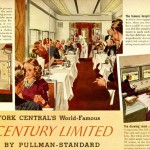 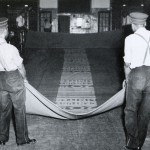 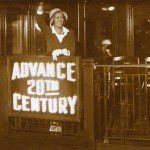 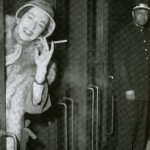