Most popular now
You are at:Home»Uncategorized»Climbing Walls
By Leslie Nipkow on February 5, 2013 Uncategorized

I confess that, when I signed up for the Warrior Dash obstacle course race, it was mostly for the fetching and furry horned helmet, and a little bit for the excuse to get all muddy. I didn’t think much about the 5K course. If I had, I might not have signed up. It wasn’t the jumping over flames which I found daunting. Nor was it the cargo net obstacles, the barbed wire crawl, the swinging tires, hurdles, lake swim or assorted ladders and balance beams. I happily plunked down my $70 entry fee along with three girlfriends from the gym. (We invited the guys. They were chicken.)

After entering, however, I did what I do, which means I studied the course like the Talmud. This strategy has always worked for me. I ran the New York City Marathon in 4 hours, 48 minutes and 52 seconds (and by the way, Paul Ryan,nobody forgets their marathon time. Nobody ever.). I ran the race as much with my mind as with my body, practicing the last 3.2 miles nearly every day for a year, and, the day before the race, driving the entire course, so that I could run from landmark to landmark. “I’ll just run to the Williamsburg Bank,” I told myself. Then I moved my goal to the Citibank Building in Queens, the Bronx’s Willis Avenue Bridge, and so forth. It was the same with the Warrior Dash. Although the precise course and obstacle list was to be a surprise on race day, I familiarized myself with all the variables that were at my fingertips. But I tried never to think about the “Great Warrior Wall.”

I have Post-Traumatic PE Disorder, stemming from a close encounter with the climbing rope in the gym at Robert Moton Elementary School. It hung straight down from the ceiling, thick as a seven year old’s forearm. The boys clamored straight up to the ceiling, but I stood at the bottom, terrified. I gripped the rope and jumped feebly towards it, with predictable results. Defeat. Many years later, I repeated the encounter with a stripper pole. (Not professionally.) I could spin, twirl, slide, split, flip, wiggle and writhe, but when my pole dancing teacher asked me to climb to the ceiling, I froze and went dead inside, flashing back to rope burns and earthbound humiliation. History would repeat itself at the Warrior Dash, but this time I brought reinforcements.

Obstacle courses and mud runs have become very popular lately with weekend warriors, risk takers, Crossfitters, bad asses and the boot camp buff. There are various levels of difficulty, the Warrior Dash being a sort of gateway race, and the 10-12 mile Tough Mudder, in which the last obstacle usually involves running your wet self through a forest of live electrical wires up to 10,000 volts to reach the finish line. (IMO, the electric shock thing isn’t so much a test of toughness as a nod toward natural selection. I.E., if you blow dry your hair in the bathtub, you may not be the best fodder for the gene pool. But that’s just me.)

These are not races for serious runners; racing sideways along a rutted, mud-slicked hill with a bunch of non-athletes who stop, change direction, and fall over is a recipe for a broken ankle or a torqued knee. Running etiquette is not respected on the course, therefore I advise starting at the front of the pack (fewer bodies in the way). My friends and I were plagued by a strangely competitive pair of Lululemon booty short wearing blondes who, for miles, would run in front of us, then stop and walk. We’d pass them, they’d catch up, block our way, and stop again to talk about how hard the race was. Most of the runners shared the spirit of the challenge and joy in the fun of getting filthy. Without a hearty boost from a strange man, I might still be treading water in the middle of a lake, trying to haul my muddy self up onto a web of wildly bouncing buoys.

We ladies of Coban’s Muay Thai Camp picked up the slack for one another. We talked each other up a nearly vertical hill, and through a mud minefield, under the expected barbed wire and, holding hands, over flames.

But when we rounded a corner and were faced with a 15-foot vertical wall, I left my body.

The wall, painted black, has no handholds. There are three or four small one inch ledges where climbers’ feet can find purchase, but the only way to climb the thing involves… a rope. The same rope or maybe a close cousin to the one hat defeated me in that elementary school gymnasium. Before I knew it, I’d spoken. “I can’t do it,” came out of me in a very small voice. I looked around the other side of the obstacle, and the way down was a piece of cake, laddered. Also, there were no broken bodies lying at its foot. I went back to the business side of the problem, and watched a shortish, less fit than me-ish, woman haul her way to the top and over. Seeing this, I remembered once hearing that “the trick is to use your legs,” mused that my upper body is far stronger than it had ever been, and that I’d recently dropped 50 pounds, which should make the physics of the task at least a possibility. I gripped the demon rope, felt like fainting, actively ignored the feeling, and started walking the wall with my feet. Within a few steps, I was hanging parallel to the ground, because I had forgotten to climb with my hands, a maneuver that was now geographically impossible. I jumped down, dusted myself and repeated under my breath, “No. Can’t.”

That’s when my jockiest friend, Kim began to bark orders at me. “Dammit! We did not drive all the fucking way to fucking New Jersey for you to walk around this wall!” At this precise moment, a droopy man walked slowly up to the wall, tugged once on the rope, then walked around the side, without so much as the appearance of a try.

Between Kim barking in my ear, drill sergeant like, and the visual reminder of what giving up looks like, I made the decision to go over that wall or die trying. I took two strides, grabbed the rope and started climbing hand over hand as fast as I could without thinking, grabbing at the footholds, looking only up at the 6 inch ledge at the top, which looked as solid as a Central Park bench to me. When it got close enough, I hauled one leg over the top and raised my arms overhead Chariots of Fire style. I sat there cheering others as they climbed the wall, telling them what a great feeling it was, reaching out to pull my teammates to the top. I didn’t want to get down, but when I did, I was changed. I was a person who could climb a 15 foot wall, using a rope.

This is the reason to sign up for an obstacle course race. Because you can always do more than you think you can. Because it’s good to be reminded of what lies outside your comfort zone. And because, every once in a while, it feels good to get down and roll around in the mud… 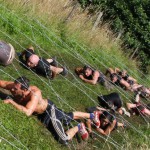 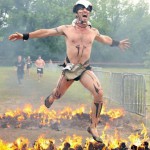 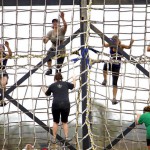 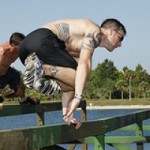 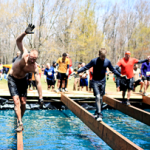 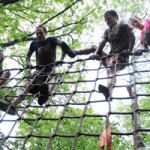 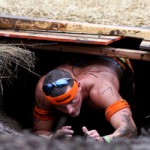 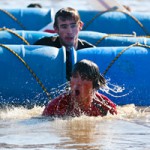 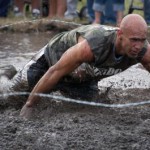 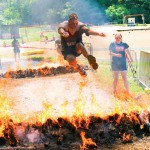