Most popular now
You are at:Home»Uncategorized»2009 Super Bowl XLIII: Arizona vs. Pittsburgh
By Josh Hammond on March 6, 2013 Uncategorized

During World War II, the National Football League struggled to keep its head above water due to a shortage of players. Today, it is rare that NFL players opt to serve their country, but in the old days more than a thousand NFL players joined or were drafted into the armed forces. (Roll call here.) The Rooney family, Bert Bell, who owned the Pittsburgh Steelers, and the Bidwells, who controlled the Chicago Cardinals, joined forces to field a team the 1944 NFL records call Card-Pitt.

The alliance saved both teams, and when the war was over both the Cardinals and the Steelers resumed play in their respective cities, and both teams came back strong. The Steelers lost the 1947 NFL eastern division final in a playoff with the Philadelphia Eagles. The Cardinals won the NFL championship that year. Coached by the legendary Jimmy Conzelman, the Chicago team wore tennis shoes in a snowy Comiskey Park, defeating eastern division champs, the Philadelphia Eagles, 28-21. It would be the last time a Cardinal team would get to an NFL championship until 2009, when they would meet the Steelers, the team they temporarily merged with in 1944. A long dry spell set in after the franchise moved to St. Louis in 1960 and then out to Phoenix in 1988.

Half a century later, the old school NFL teams would hook up to give fans what some sportswriters consider the most exciting “aerial circus” Super Bowl ever played. In a game decided in the final minute, the Steelers would outlast the Cards in a win no cover 27–23 victory. It was a battle of “mad bomber”quarterbacks, Pittsburgh’s Ben Roethlisberger and Kurt Warner of the Phoenix Cardinals.

The game was played in Tampa Bay on February 1st 2009, and, while advertising industry executives were concerned that the economic crisis would impact the audience, 98 million people watched the game on NBC-TV, the biggest audience for a Super Bowl to date.

Not only did the game pit two Super Bowl-winning quarterbacks against each other, Steeler coach Mike Tomlin and Cardinal head coach Ken Weisenhunt both owned Super Bowl rings from their days working as assistants to former Steeler coaching icon, Bill Cowher.

Arizona scored sixteen 4th quarter comeback points only to be denied with a last minute pass from “Big Ben” Roethlisberger to Santonio Holmes (picture above) that sealed the memorable and dramatic victory. Oddsmakers had Pittsburgh as 7 point favorites, but they did not cover the spot.

Warner had bootstrapped himself, working as a supermarket stockman to the Arena League, and a tryout with the NFL St. Louis Rams. The tough journeyman surprised the football world and won a Super Bowl under coach Dick Vermeil in St. Louis before Arizona picked him up as an aging backup whom many pundits figured was over the hill. Almost winning another Super Bowl with the Cards showed that Warner still had the magic as a playmaker.

Then, proving he had a lot left in the tank, Warner led the Cardinals deep to the playoffs during the 2009 season, and something ugly happened.

In a playoff game January 16, 2010 Warner was injured, probably concussed, in the first half, trying to tackle the ball carrier after he threw an interception during what would be a a 45–14 loss at New Orleans against the Saints in an NFC Divisional round. He took a jolting hit that cleaned his clock and was down for a few minutes.

Warner returned for the second half, but he was off his game. He was replaced by Matt Leinart during garbage time. In post-game interviews some Cardinals players commented that they thought the hit on Warner was cheap and intentional. Warner and the game day officials are on the record saying the hit by New Orleans Saints player Bobby McCray was a clean hit.

Clean or not, it would be determined that Warner was the victim of a “bounty hit” that effectively ended the career of one of the NFL’s most successful quarterbacks. Warner retired during the off-season.

After a lengthy and controversial investigation, the NFL determined that the Saints, for three years, operated a “bounty system” that would reward players financially for knocking opponents out of a game, and that Warner and Minnesota quarterback Brett Favre were victims of the “bounty program” that helped the New Orleans team during their Super Bowl winning 2009 season. The NFL website and the mainstream sports press have stayed away from linking names of those knocked out of games by the “bounty” program. Warner and Favre have stayed quiet too. But Warner has gone on the record saying that he does not want his kids playing football, indicating he prefers they play soccer instead.

In 1960, just as the NFL was cutting its teeth on national TV, CBS did a documentary called “The Violent World of Sam Huff” narrated by Walter Cronkite, looking at the legendary New York Giants linebacker Sam Huff as he goes mano a mano against the great Jim Brown of the Cleveland Browns. Maybe its time for “The Violent World of Kurt Warner”… but the NFL wouldn’t like that too much. 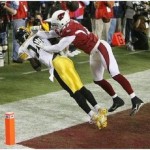 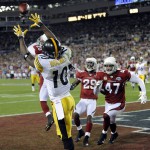 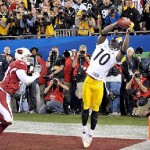 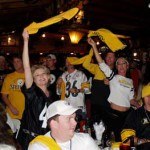 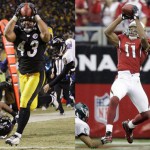 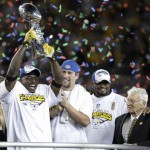 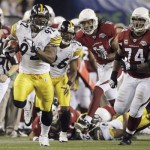 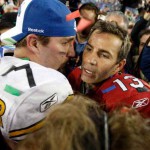