Most popular now
You are at:Home»Arts»Photography»Drawing with Light: The Pinhole Image
By Josh Hammond on August 25, 2012 Photography

Extraordinary things happen in these [pinhole photography]moments time and time again. In both stillness and movement, the living breath of the environment is captured.

That time, those happenings, give rise to an authenticity in the images that a single shutterlock overrides. It results in a sureness of presentation, a confidence, and a depth that captures, for me, the essential experience of being there. As a photographer, in these circumstances, what emerges from these images in the darkroom is a matter of faith, subject to the laws of chance, but which opens up a miracle world of new possibility.

A few years ago I started fumbling around with pinhole cameras, making basic ones from cardboard boxes, then plywood versions with tripod mounts and hinges: always large, using 12” x 10” paper for negatives, and now 10” x 8” film in film-holders. And all with just a pinhole, literally, instead of a lens.

Having used all the exotic and expensive still cameras for 40 years, this simple process had obvious appeal: but once I saw the results, which appeared after a bit of testing and adjustment, I was hooked.

No viewfinder to “frame” and compose the content. No fine tuning. No knobs. No button to press. Just a light meter, a watch, a bit of tape, and plenty of sun. Plenty of time, too. No rush. Just a few exposures. Drawing with light.

These pinhole exposures are long, from 30 seconds to a few hours. I decided early on to use time as a compositional element, with movement an all-important component in the photograph…why else use a pinhole? Water and wind and a brave model provide the mystery, as well as the box itself, which does indeed make the image.

I realize I’m not the first, and will not be the last, to use pinhole cameras, or to shoot nudes on the beach, but this exercise in simplicity and anti-technology, has got me up and really running.

This series of photographs came about from the convergence of four circumstances in my life. First was my frustration with the conventional photographic process, with its predictability, its accuracy, if you like. Second was my developing involvement with the capabilities of the pinhole camera. Third was my chance meeting with the model in most of the photographs, Rita Horth. Without Rita’s boldness, sense of adventure, assistance and real interest, these images may well not have been made. And lastly, I have, for a long time, been looking for a way to be more immersed and rewarded by my personal photography, to be more excited by the imagery I am producing, and the fruits of this homemade wooden box have certainly given me this thrill.

On the technical front, I revel in the simplicity of having no knobs or buttons, digital or otherwise, to contend with. On the other hand, the pinhole demands an entirely different approach, an openness that precludes the notion of a preconceived result. For those of us who have spent a lot of our lives converting (mostly other people’s) preconceived ideas into photographic images, this discipline can be a difficult master.

In return, however, its great gift is its unpredictability. Working without a viewfinder, there is no guarantee that anything will appear on a negative where you think it should be, and, therefore, there is always the risk that nothing at all will result from a photographic session other than the experience itself. But in fact, it is the experience, precisely, which is the essence of pinhole.

Even in bright sunlight, the pinhole requires long exposures—anything from 30 seconds to a few hours—and each image is the legacy of that period of time, those moments in life, recorded by the process and influenced by its limitations and demands. Both the photographer and the subject are servants to this simplicity, and both have to allow the process to preside, to take over and to rule those moments. 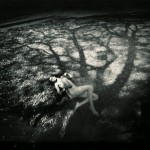 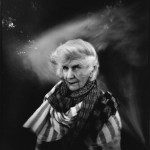 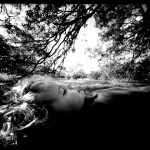 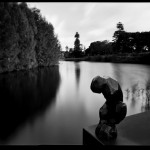 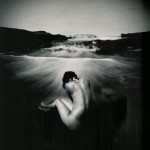 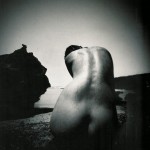 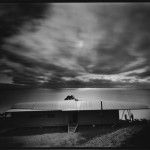