Most popular now
You are at:Home»Memories»Places»I Took Heart From Omaha Beach
By Josh Hammond on June 6, 2014 Places

If you visit any National Park in the USA, or any shoreline, it is against the law (rules and regulations) to remove artifacts, shells, stones, even sand in some places.

Not so on the beaches of Normandy. In fact, visitors are encouraged to take a souvenir, a rock, a scoop of sand, a piece of metal. Omaha Beach, brought home to us in a gut-wrenching way in the opening scenes of Stephen Spielberg’s movie “Saving Private Ryan,” reminds us of the carnage, destruction, agony and pain of war, especially on the first assaults, the first landings.

About 3000 soldiers were mowed down in the first few hours of landing, or trying to land, on Omaha Beach. It’s a sad place. The turning sands of the 20th Century.

The Germans were certain of two things in the months and weeks before June 6, 1944: the Allies would not land on Normandy beaches, but if they did they would land at high tide. The Allies landed at low tide. I was there at low time and it took my breath away. There are big tide swings on the English Channel. At low tide, one can barely see the Channel waters away in the distance, a half-mile or so where out there. In the movies, as with Spielberg’s, the landings are up close, at high tide. The low tide D-Day landings on Omaha Beach turned soldiers into sitting ducks. The Americans were defenseless for the first few hours of D-Day. What they didn’t lack was courage and bravery. That is what I remember on D-Day and any day I see a WW11 veteran, an increasingly rarer and rarer sight.

As I was leaving Omaha Beach my guide reminded me that I could take a souvenir, if I wanted. I’m a stone and pebble collector. I spotted the one pictured above in the top frame. It was a heart-shaped stone that fit into the palm of my hand. When I turned it over, I noticed it was broken, stained, and scared. I left with a broken heart. 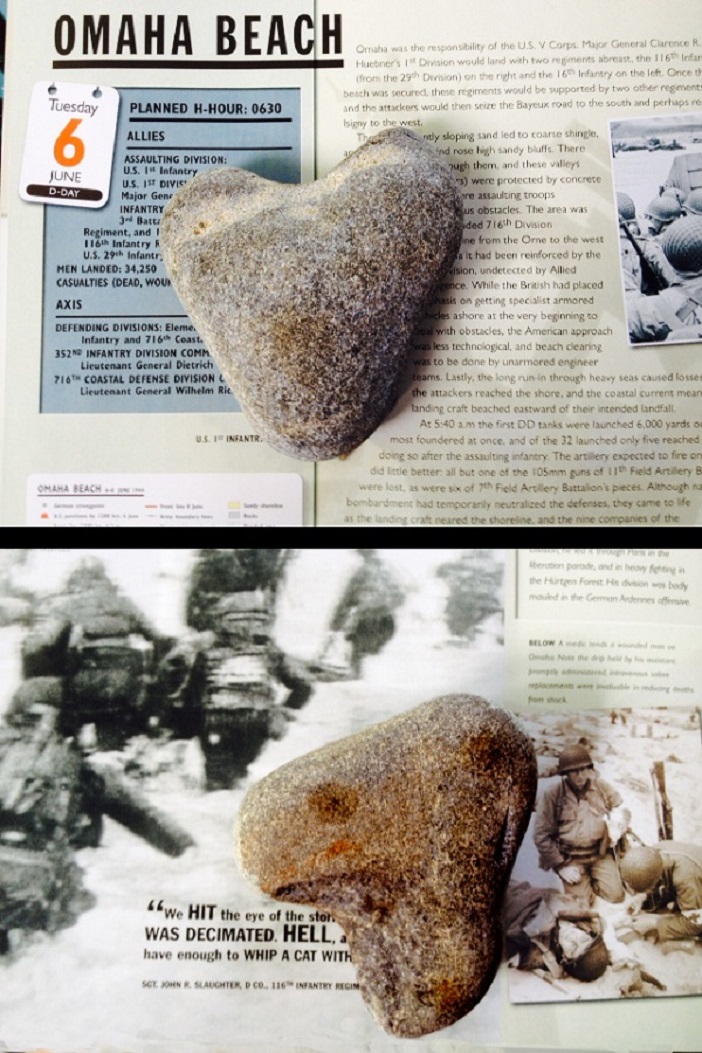